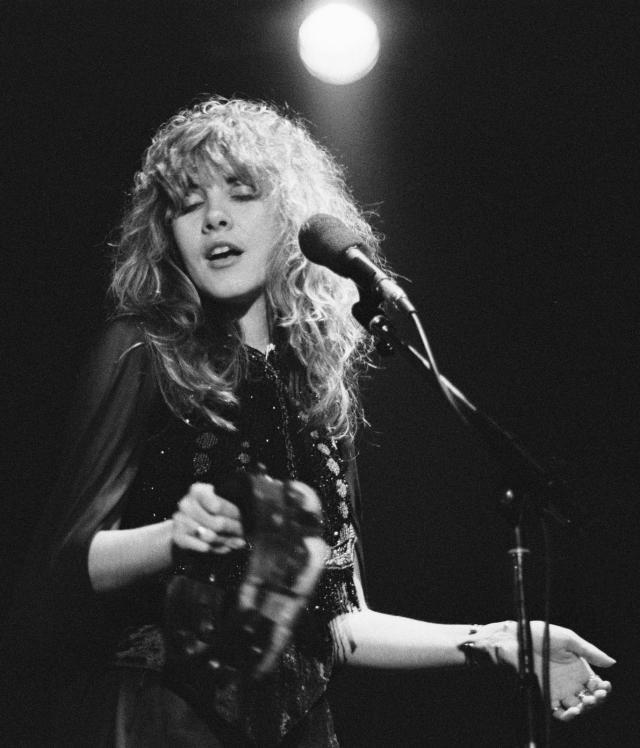 Stephanie Lynn “Stevie” Nicks first stepped into the public eye with her role in classic rock band Fleetwood Mac. She entered the band with then-boyfriend Lindsey Buckingham, joining Mick Fleetwood and Christine and John McVie. Stevie worked with them from 1975 to 1992, and sang on hits such as “Seven Wonders,” “Dreams,” and “Gold Dust Woman.” Stevie’s music was characterized by the smooth, deep lilt of her voice. She spun around the rock and roll scene in her signature shawls, flowing dresses and top hats, tambourine in hand. Stevie’s career redefined rock and roll, and challenged its male-dominated nature.

Stevie wrote a song titled “Silver Springs” for Fleetwood Mac’s 1977 album Rumours. During this period, the band was experiencing the drama of rampant drug use and collapsing relationships, and tension embroiled its members. In Silver Springs, Stevie sings to Lindsey Buckingham through the turmoil of their derailing relationship, imploring him to listen to her and telling him, “you will never get away from the sound of the woman that loves you.” The song was not released on Rumours, and was instead used as a B-side for Buckingham’s “Go Your Own Way.” For years, the song was not put out or performed. “I never thought that ‘Silver Springs’ would ever be performed on stage (again),” Stevie admitted in an interview with MTV in 1997. “My beautiful song just disappeared.”

Following her split with Buckingham, Stevie stayed with Fleetwood Mac for many years. She had a spellbinding ability to write songs that beautifully expressed her emotions. One of the band’s first and most famous songs, “Landslide,” is a reflection of this talent. It paints a picture of her feelings towards Buckingham and her continued singing career in the midst of a time when both were uncertain, as well as the Colorado landscape in which she was immersed while writing it. In “Sara,” Stevie sings about her unplanned and subsequently terminated pregnancy with Don Henley. “Had I married Don and had that baby, and had she been a girl, I would have named her Sara,” she disclosed in a 2014 Billboard interview. “Sara” says a lot about Stevie’s feelings towards the pregnancy, and its emotional toll on her. “There’s a heartbeat,” she tells us, “and it never really died.” Stevie’s strong connection to her music was also evident in her performances. She gave such intense renditions that Mick Fleetwood has said of one of Stevie’s signature songs, “her ‘Rhiannon’ in those days was like an exorcism.”

There were numerous sources of friction in Fleetwood Mac through the years, from the aforementioned failing relationships and excessive drug use, to logistical disagreements and oddly constructed love triangles. However, the final incident that caused Stevie to leave the band took place in 1992. Mick Fleetwood blocked Stevie from including “Silver Springs” on her 1992 anthology, “TimeSpace,” due to his own plans to release it later in the band’s career. She left Fleetwood Mac shortly afterward.

Throughout and following her involvement with Fleetwood Mac, Stevie had a rich solo career. On her own, she released iconic songs such as “Rooms on Fire,” “Bella Donna,” and “Edge of Seventeen.” She collaborated with several other well known artists of the era, including Don Henley on “Leather and Lace” and Tom Petty on “Stop Draggin’ My Heart Around.” Stevie released a total of eight solo studio albums and one live album. Adding this to her work with Fleetwood Mac and other groups, Stevie’s discography totals thirty-six albums. She also sang backup for artists including Walter Egan and Kenny Loggins.

In 1997, Fleetwood Mac took the stage in Burbank, California for a reunion performance titled “The Dance.” The band performed “Silver Springs” for the first time in decades, and Stevie was finally given a chance to show the world her suppressed masterpiece. Her aching, heartfelt performance earned a Grammy nomination. “You won’t forget me,” the song echoes with an almost spiritual fervor, and for Stevie, these words have proved prophetic. Her legendary career and lasting influence are clear reasons for her recent nomination to the Rock & Roll Hall of Fame. Hopefully, come March, she will be immortalized in its walls.

Sneak peek!! T- 20 minutes until our #launchparty!!!!! Come to the Bill Bordy for free food and music!
It's #launchparty time tonight!!! Come to the Bill Bordy from 6-8 PM for free food and music!
Slack Tide, a band that identifies strongly with the East Coast released their debut album, Water Monkey! #bands #jamband #reggae Check out our article on them in the website link!
We sat down with Berklee's newest pop star, LELA, to discuss her exciting post-grad plans. Check out her debut single "Pendulum," and catch her performing songs off her upcoming EP at our December #launchparty. https://fivecentsound.com/2016/11/29/artist-spotlight-lela/ #artistspotlight #musician #berkleecollegeofmusic
Come hang out with us at our launch party on Wednesday, December 14th from 6-8 PM in the Bill Bordy! We're gonna have free food and live music performances. Check out the event link in the bio! #launchparty #musicmag
@beachweather at The Middle East in Cambridge on Nov 17! #newep #chitchat #beachweather
@againstthecurrentny last night!
We are snapchatting @waxonfelt's Battle of the Bands TONIGHT at 7 pm in the Cab! Add us: fivecentsound 😊 #bands #battleofthebands #livemusic
Check out Wax on Felt's Battle of the Bands TOMORROW in the Cabaret from 7-11! @waxonfelt #battleofthebands #bands Link in bio!
More Beach Weather! 📸: @bobby_wieder #chitchat
Beach Weather's show Thursday night! @beachweather 📸: @bobby_wieder #chitchat
@finishticket last night! #indiepop #indierock
@finishticket at Brighton Music Hall last night! 📸: @sabrinadcombs #finishticketconcert #indiepop
Last one of @freedomfry at Madewell yesterday! Great show #denimforevertour #freedomfry #madewell 📸: Caitlin Smith
Some more @freedomfrymusic at @madewell yesterday!
@freedomfrymusic playing as a part of Madewell's "Denim Forever Tour" #madewell #denimforevertour #freedomfry #newburyst 📸: @mirandahicks
Welcome back to school everyone! Be sure to find us at the Org Fair tomorrow in Piano Row! #musicmag #studentrun
#sneakpreview of our spring issue!! #studentrun #mag
We're in PROW 118 from 7-9!! Pick up a #copy!
Cody Kenner's "Songs on Repeat" #playlist #mattandkim #bombaybicycleclub #vampireweekend
%d bloggers like this: